This is one of the gifts that seemed to take the longest time, and I finally finished it on the 21st!

I don't think I realised how long it would need to be!

I had been wanting to try a ripple pattern for a long time now, but I knew that a blanket would take me far too long (and probably never get finished.. I still have 3 blanket WIPs). Eventually I realised that I could use the ripple pattern to a make a cushion cover. Incidentally, not much after that I was gifted a crochet book by my mother-in-law which had a pattern for a ripple cushion.

I attempted to follow that pattern in the book, but I just couldn't get to grips with the way their ripple was constructed. I decided there must be an easier method, after a little searching I rediscovered Lucy's ripple pattern. I then just adjusted the stitch count so that it would fit the cushion pad that I bought in Wilkinson and off I went! When I finally finished the crochet I sewed up both sides with an overlap and dug out some pretty buttons. All finished!

And here it is: 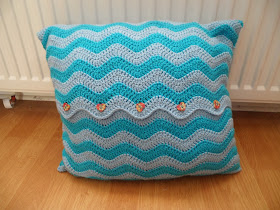 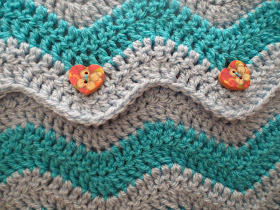 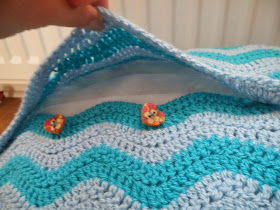